With around 22,000 residents, the 19th Ward is Rochester, NY's largest neighborhood. Its borders are West Avenue to the north, Genesee Street to the east, Scottsville Road to the south, and the Erie Canal to the west.

The 19th Ward consists of tree-lined streets filled with one- and two-family homes and a scattering of small apartment complexes. The neighborhood prides itself on its racial, ethnic and economic diversity; university professors, students, city officials, and families all live together here.

The 19th Ward is well-served by RGRTA buses, and has three exits to it on Interstate 390 (17, 18B and 19).  It is close to RIT, the University of Rochester, University of Rochester Medical Center, St. Mary's Hospital and the Greater Rochester International Airport.  It is also bordered, in part, by Genesee Valley Park, the Erie Canal and Genesee River.

For U of R Students

Anywhere you live in the 19th Ward area is within a short walk of a bus running directly to campus. In a car, the commute to campus would be no more than 5 minutes. The key to walking or riding a bike to campus is the pedestrian bridge across the Genesee River located at the end of Brooks Landing (the corner of Brooks Avenue and Genesee Street). The bridge takes you right to campus, placing many places in the 19th Ward within a few-minute walk of campus.

Jim Dalberth Sporting Goods on Genesee Street is one of the better sporting goods stores in the Rochester area.  The closest supermarkets are Tops on West Avenue, Wal-Mart in neighboring Gates (at the western terminus of Brooks Avenue) and Chili-Paul Wegmans in Chili.  D&L Caribbean American Grocery on Genesee Street is an interesting place to stick your head in as well.

Hunt's True Value Hardware has been in operation since 1914 on Thurston Road helping neighbors maintain their homes. Rite Aid operates a pharmacy with drive-thru service on Thurston Road.  HSBC has a bank branch on Thurston Road at Chili Avenue, and Chase has a branch on Genesee Street in the Bullshead Plaza. 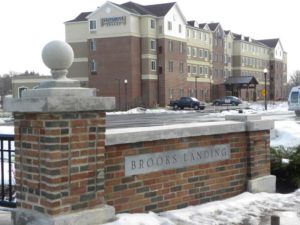 The newest Boulder Coffee Co. location, and the brand new, 88-room Staybridge Suites hotel are at the corner of Genesee St. and Brooks Ave. in the redeveloped Brooks Landing area along the river.  A pizza shop and sushi restaurant are scheduled to open up within the next year on the bottom floor of the Brooks Landing Business center. Menezes Pizza on Chili Ave., Natural Vibes on Lincoln Ave., Unkl Moe's on West Ave., and Campi's on Scottsville Rd. are also popular dining options.